The Abendschone Chapter, NSDAR in Eureka Springs, celebrated the 128th anniversary of the founding of DAR and the National Day of Service at their monthly meeting on October 11, 2018.
END_OF_DOCUMENT_TOKEN_TO_BE_REPLACED

A special exhibit at the Eureka Springs Historical Museum opened in April of 2017 to commemorate the 100th Anniversary of World War I.

Museum volunteer and Abendschone Chapter NSDAR member, Suzanne Williams, collected items from Carroll County, Arkansas residents for the exhibit. Several NSDAR members made contributions. The exhibit included a uniform, original sheet music, photos, maps of France, a letter from General Pershing, a feed bucket for horses and mules, and mess kits. Visitors were especially interested in the trench art, made from shell casings and spent bullets. The exhibit continued until the end of 2018 and was well received. 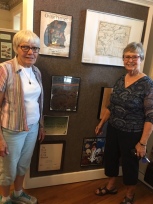 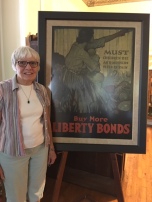 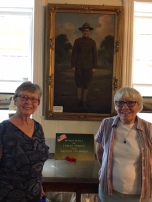 Oil painting of Crandall Walker, a Eureka Springs “Doughboy” who was killed in action in the battle of Argonne Forest in 1918 during World War I. 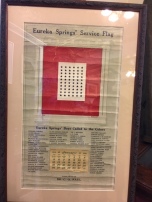 END_OF_DOCUMENT_TOKEN_TO_BE_REPLACED

The content contained herein does not necessarily represent the position of the NSDAR. Hyperlinks to other sites are not the responsibility of the NSDAR, the state organizations, or individual DAR chapters.